Apologies for my very delayed final entry but better late than never.

After being in Aero for a few days due to fresh winds we headed north to Svendborg which was a nice sizeable town with a lovely marina and lots of old ships around. After one night we headed out the beautiful channel which had some very nice and expensive holiday homes. The wind was light and the weather warm as we rounded the north of the island of Langeland and across the Grosser Belt. The chart showed a small island called Omoe and a small harbour at the north end. The Baltic pilot gives very basic information and of course cant show every harbour so even though it was quite a shallow approach we slowly made into a small harbour with some post berths which were full and a good fishing harbour. As in most places we were made welcome and tied up in a very comfy berth alongside. It was a gem of a place and we enjoyed a long evening walk. I had a swim as Susan made some excuse! I braced myself for the cold but it was quite warm and very pleasant. 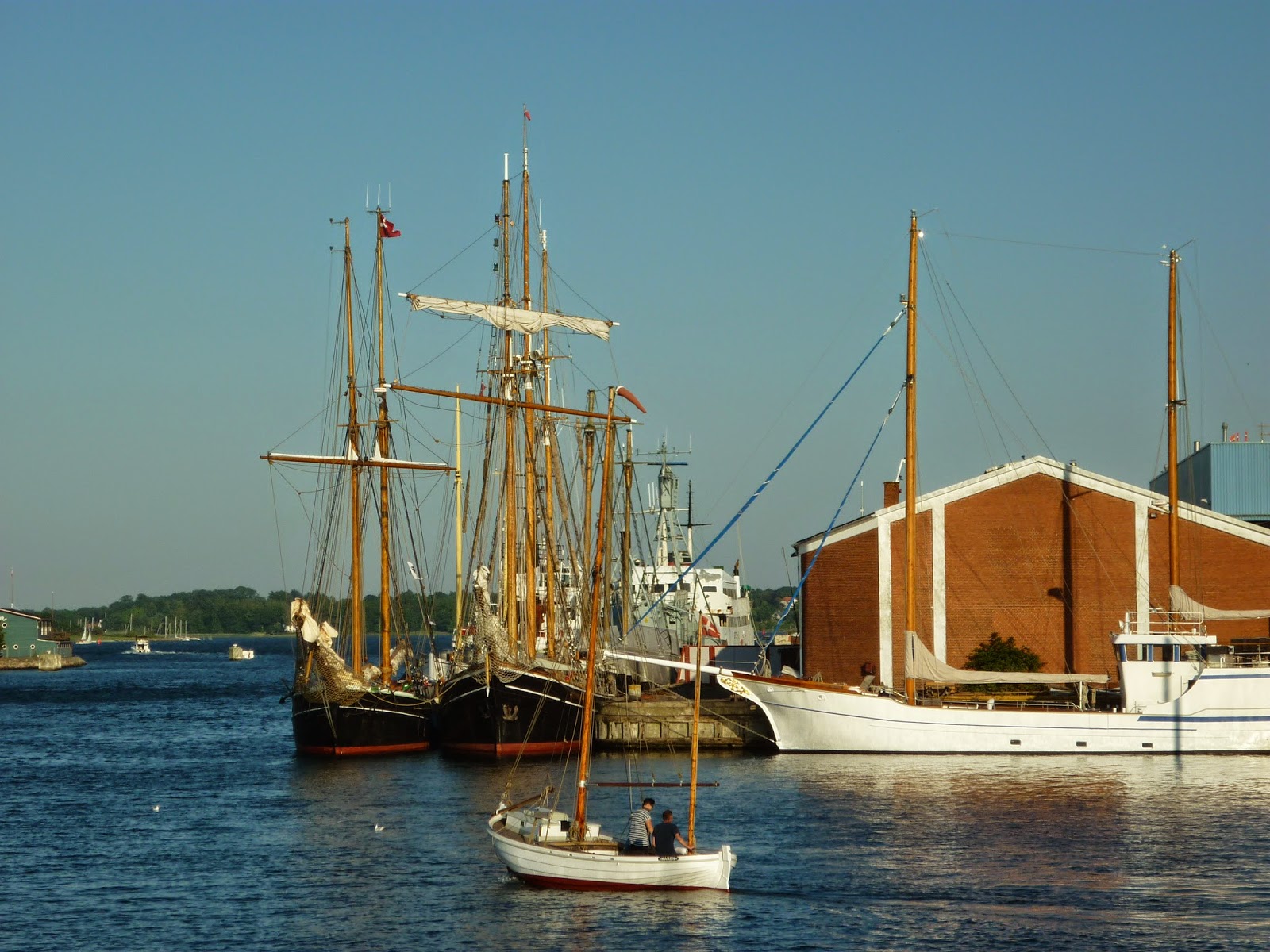 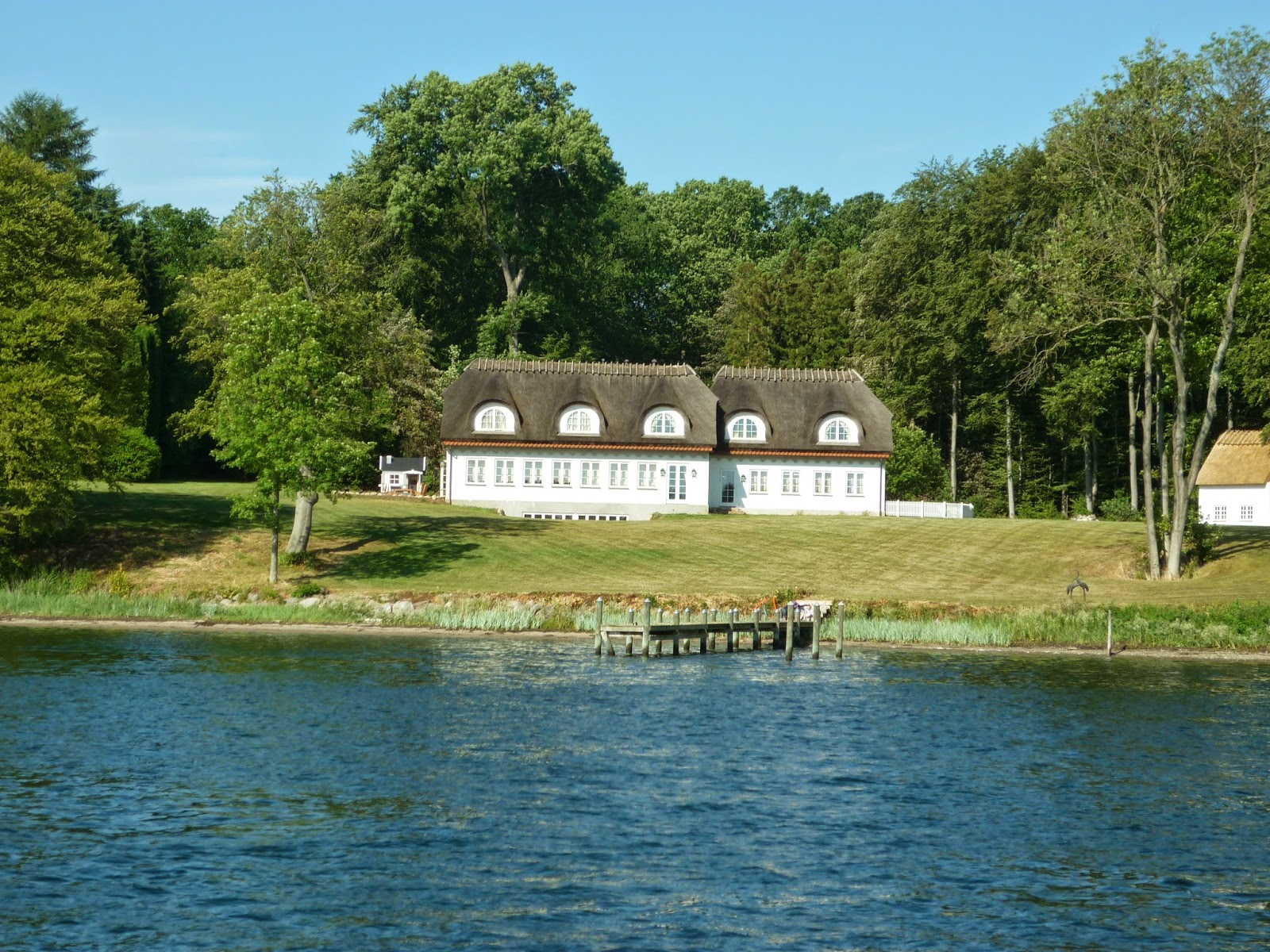 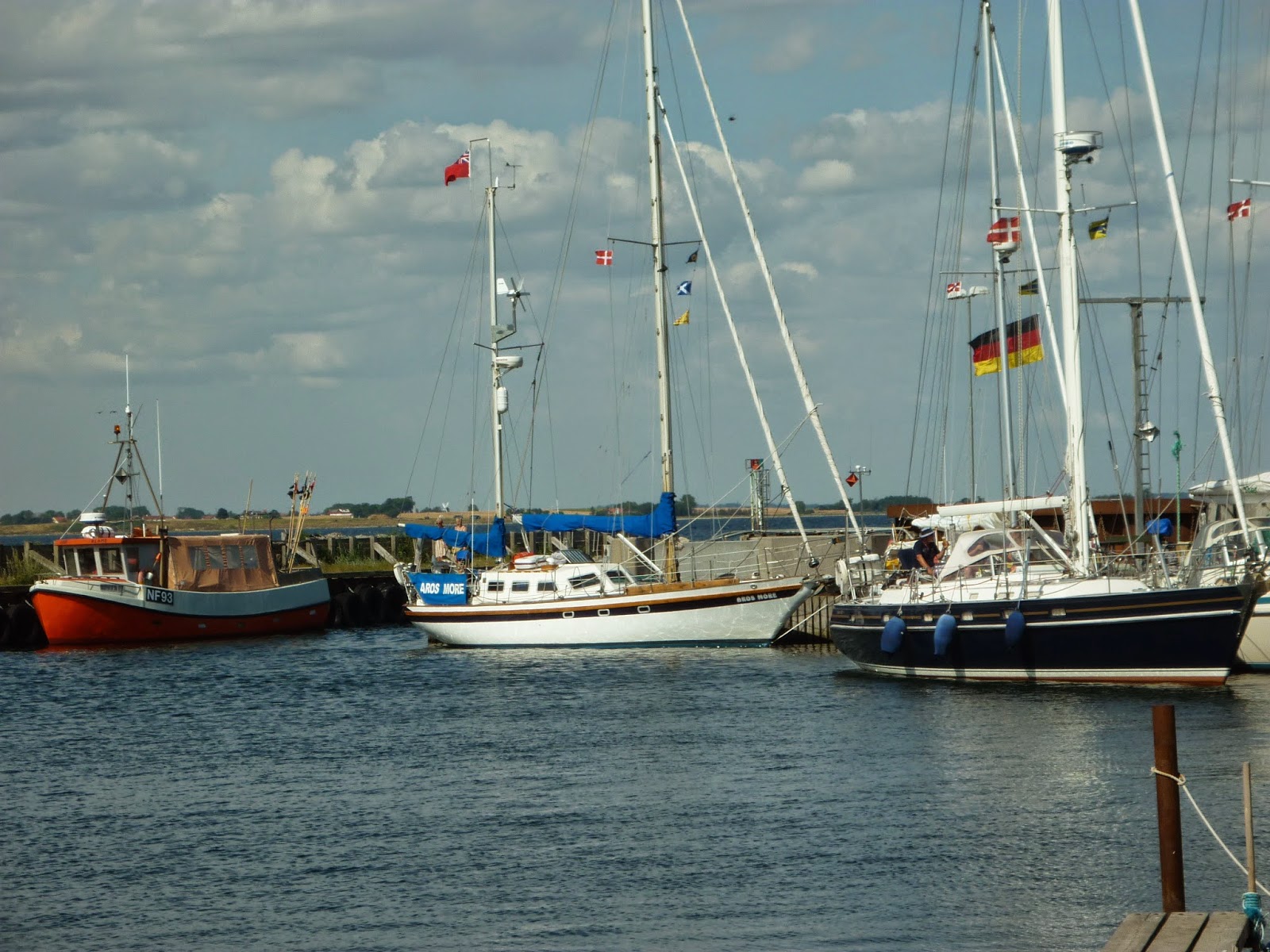 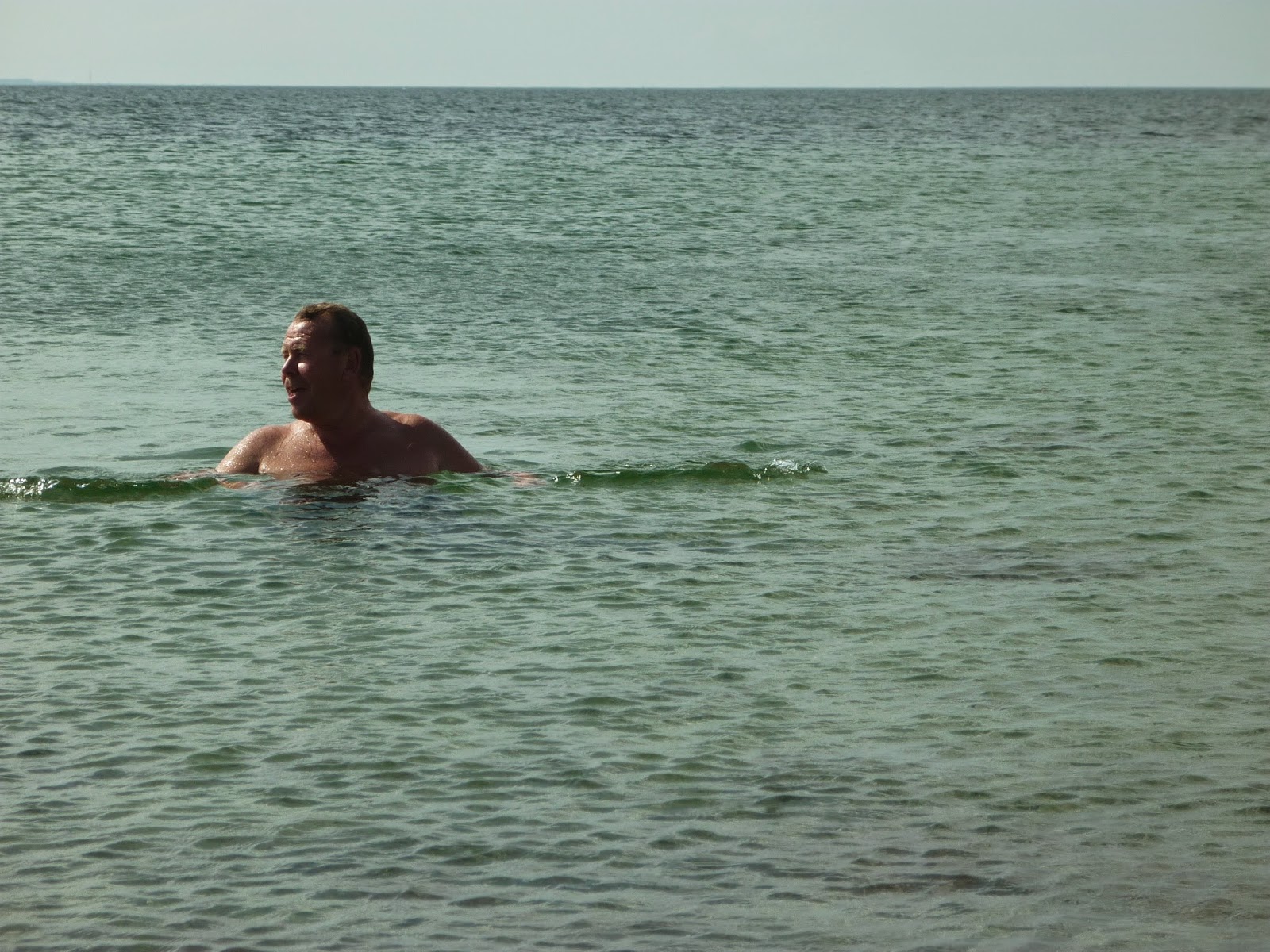 ﻿Next day sad to leave Omoe we headed east through more bridges to a tiny post berth in Vordingborg in the Storstroem on the south coast of the isalnd of Sjaelland. We headed into town and found a festival in full swing. Lots of live music and all ages loining in the fun. Not wanting to overdose on fun we headed back about 10pm as the noise boomed away in the background.
Still heading east we pondered if it was possible to leave the Stoerstrom by the north channel. This was mentined in the pilot book as being only suitable in very settled weather as it goes out in a very tight channel 4 miles offshore and is supposed to be dredged to 2.2metres depth. We decided to do it in the light westerly which took us through very tight turns and under bridges with 20m airdraft. I had been under 19m bridges in Norway so I put Susan on the helm to watch her face as the mast looks like it will never fit under! She fretted but kept going ( unlike my brakes on napproach in Norway) The channel out to sea was very busy with yachts which gave me confidence but the sounder at times showed only a spare .3m under the keel and we could clearly see the bottom for much of the way. Glad to be in deeper water we made for Roedvig and tied up again alongside in a busy wee fishing harbour. the weather was due to be grim so we stayed 2 nights and it poured with rain on the second day.

Must rain a lot in Roedvig 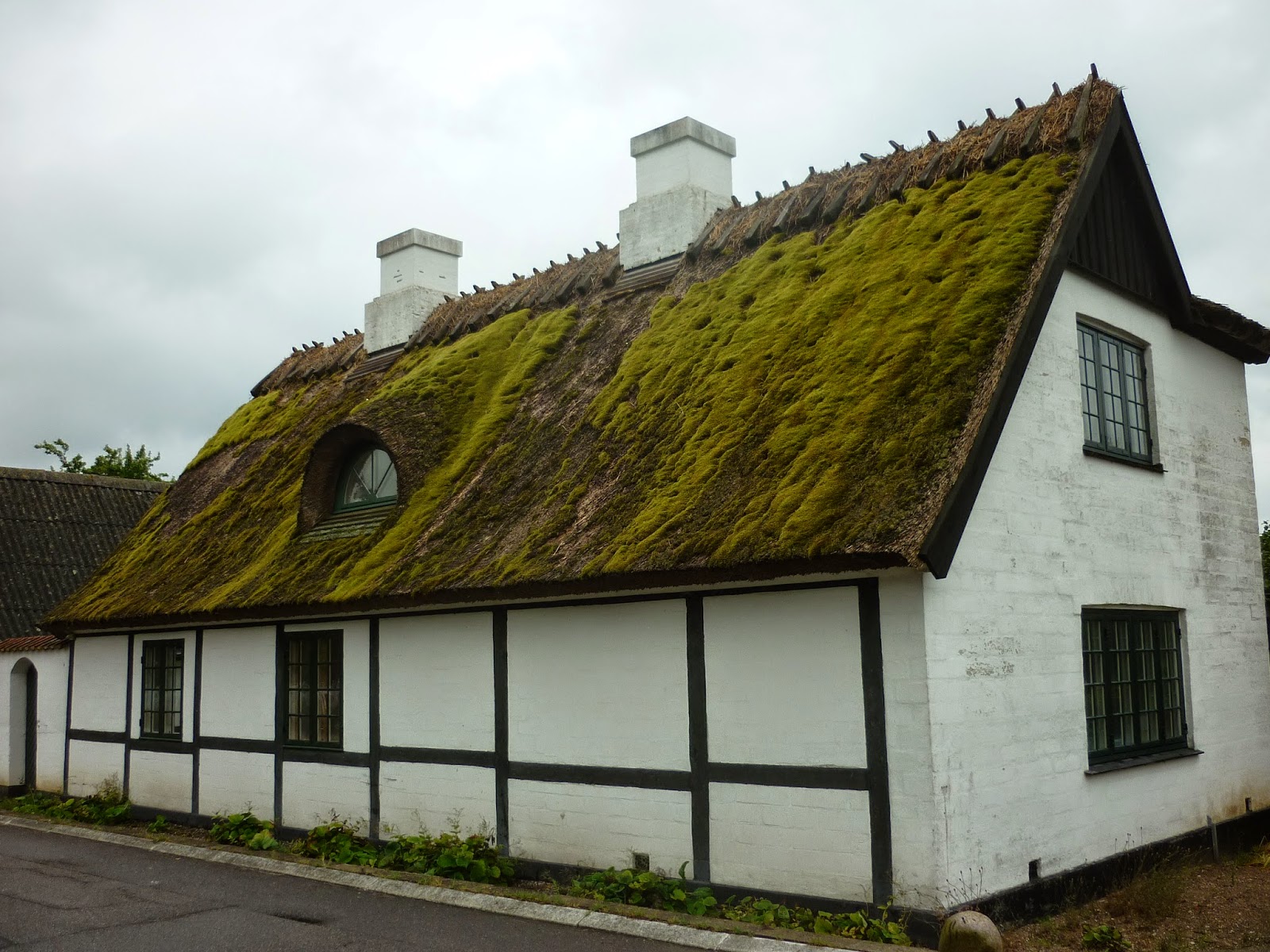 Weather changed and it became very hot. We thought we would head over to Malmo in Sweden and sus it out ﻿for a visit with our daughter who was due in Copenhagen in a few days time. We headed into a marina on the southern outskirts of Malmo under the famous "bridge" again. A bus into town we checked out the central dock marina for a future visit.
Next day back over to Demark and Draegor only 8 miles south of Copenhagen and 2 miles south of the airport. We had a few days so hired bikes and cycled around in the increasing read roastind temperatures. Lynda arrived for her whistlestop cruise so we headed over to central Malmo and tied up in a good example of a dockland marina. It was though boiling hot with no air. The old boat hook fell apart while tying up and I left my phone sitting on ndeck which got fried in the sun. Susan and Lynda went shopping and I potterd doing jobs here and there. I did a steak dinner when it bwas showing 35 degrees in the cabin! Off to Copenhagen next day and found a berth in Langeline marina which was bows to after tying onto a  stern  buoy. Nprobs to the slick crew(and the flat calm). A nice marina witha pleasant 15min walk to the center of town. We did the tourist thing though it was very hot to wander all day.