This is the last post on the blog as I’ve succumbed to the world of Facebook and created a group which is easily found by searching Facebook for Aros More.

It’s very much easier to put on photos, films and locations. It also allows anyone else to post any photos etc that they take during a visit.

Thanks for everyone’s patience.

Heading south the plan was to do the 150 miles to Lisbon somDavy could get his flight home in a weeks time. We hoped for some good sailing as we were in the Portuguese trade wind zone which should give winds from a northerly direction. We aimed to take a good bite out the journey doing a 65 mile sail to Figuera de Foz. After a long day we arrived late in the evening and anchored just inside the breakwater. The town seemed a bit industrial so we didn't miss much by not going ashore. We tackled the Chile and managed half of it!

Next day we headed off for Nazare which is reputed to be an all wether harbour due to the fact the Atlantic has a narrow but 125m deep channel running almost to the harbour entrance. It's also famous for it surfing and even on a good day we heard the breakers pounding on the shore as we approached. Waves attain over 100ft in big storms.
LS851

Glad I didn't take this pic from the boat 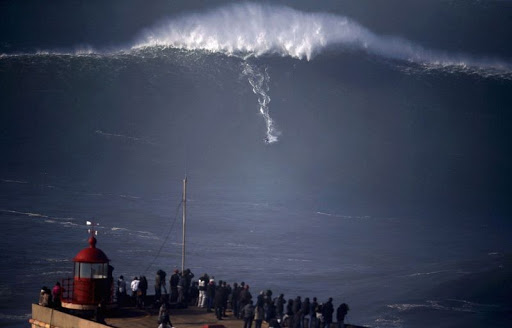 We stayed in the very pleasant Marina assisted by a very helpful Marina manager. The second half of the chile was demolished and a walk ashore to stretch the legs was welcome. The town was a wee bit disappointing and reminded me of a Rothesay, maybe it was just too early in the year.

A breezy morning but with only a 25 mile sail to Peniche meant we had a blast with 25 knots on the starboard quarter. Quite a lumpy sea made for some busy work on the helm but great fun in lovely sunshine. The forecast was for stiff winds all next day so a day off was in order. Peniche was a nice town with friendly bars and restaurants. Obviously popular with the Portuguese people for holidays and day trips to the coast. We had a healthy walk to the lighthouse on the point where Colin lost another hat!

Davy after the walk to the point. 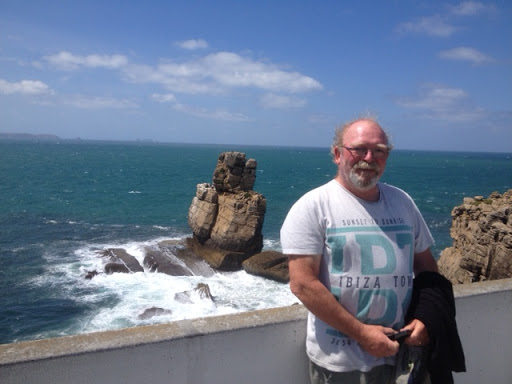 No winds next morning saw us heading away for a 60 mile trip to Lisbon. We had no wind until the last 15 miles up into Lisbon but had a good sail unfortunately with a foul tide of 2 knots.

We sailed under the awesome 25 de April bridge which not unlike the Golden Gate Bridge spans the river Tagus. We tied up in a huge central Marina at reasonable cost and Davy prepared for his flight in the morning. 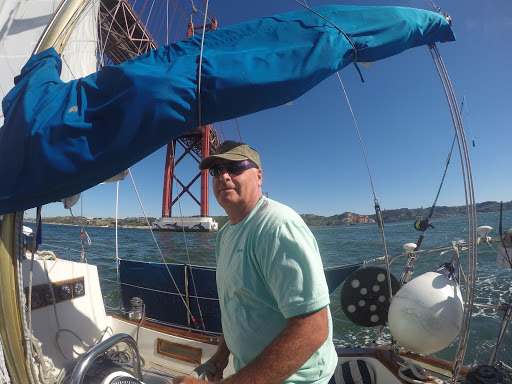 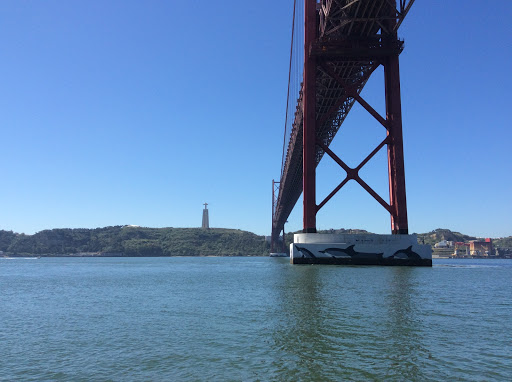 When Davy left Colin and I had a day in Lisbon doing the tour bus and enjoying most of the sights the city had to offer. Whilst it was interesting in my opinion did not compare favourably with Porto. We left next day going around Cabo Espichel and into a very nice anchorage with a really shallow approach over sandbanks called Arribida. We loitered around a big purse net fishing boat who shot away in front of us and quite near the shore. It was interesting to see how they managed the huge net. The wind blew strongly off the shore in the evening and it was roasting. I've never seen the humidity gauge so low. The sails were quite crisp with lack of moisture.

An easy 35 miles next day with no wind and masses of dolphins down to Sines with 3 customs officials coming aboard to check all papers passports etc. All done in a very friendly manner though. A good walk and meal ashore meant we were fit for the long haul to Cabo de Sao Vicente. It was a long day with little wind until the last few hours but we turned the bottom corner of the Iberian peninsula and were officially in the Algarve. We anchored up in a remote bay for the night. Headed no along the coast it was now apparent we were n the holiday zone. It's an interesting rocky coastline around Lagos with tour boats buzzing in and around all the caves. Into Alvor to a very pretty anchorage and a dingy ride into town found us well into the land of the all day breakfast. It was a nice town though and good to be ashore but n the sun. Not Vilamoura next day and the €56 a night Marina! The sea was great for a swim though. Faro was next as Colin had to fly home as his two weeks were up. Faro is in the Rio Formosa a large area of wetland with varied birdlife beautiful beaches and strong tides. We headed in through the narrow entrance and went quickly with the flood tide up the marked channel. It narrows a lot near the city but like most things after a few times you get to know it well. We had to anchor about a mile from the nearest landing area which involved winding through channels. Colin's flight involved a trip in the dark but we managed fine and Colin left for home. Both him and Davy were good fun and good tolerant crew. 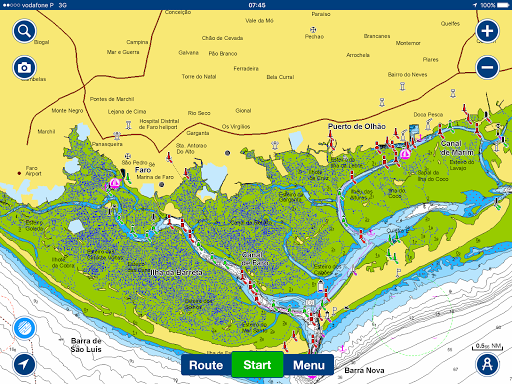 I had time to service the engine and do some chores before Jim arrived in two days time.

I've not been very good at keeping the blog updated mostly as the app on the iPad stopped working I have now got the new app and as I'm anchored in strong winds in Faro I have time to recount the tale!
Its been 9 months since Aros More's bottom was wet with Biscay water. I did a road trip in February to deliver some heavy items and do a few jobs when she was out of the water. I also had a survey done which thankfully turned out well.
I returned on 2nd of May and lifted in the next day. All went very smoothly after which I motored the 1 mile to Marina Coruna where I had 2 weeks on a pontoon before heading off. Lots of things to do with re rigging sails varnishing and maintenance on winches etc.
A nice berth in the sun! 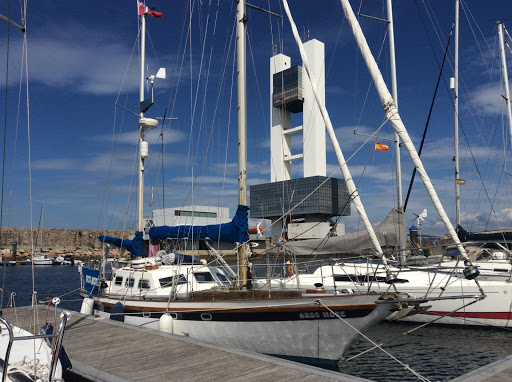 Having discovered the two big leisure batteries needed replacing this posed a challenge both sourcing them and removing them from under the floor as they are about 60kg each. I used my fender board and pyramid building style managed to get them up and off the boat and new ones in.
Up and oot! 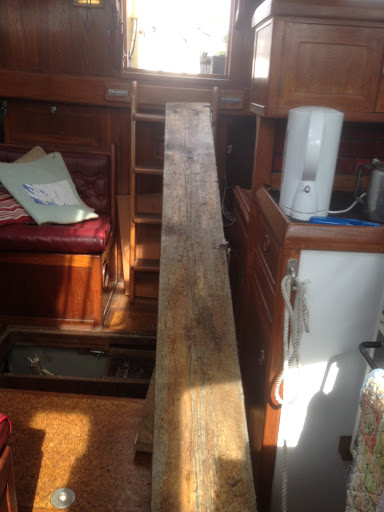 Coruna is a very pleasant small city with all the people around the Marina helpful and friendly. I

worked most days but found time to look around and enjoy the great hospitality of the club Nautica with Alex and Anna looking after me very well. It seems a beer comes with a lovely tapas dish so a ate well! 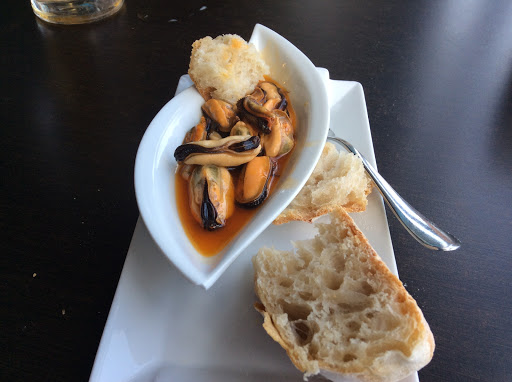 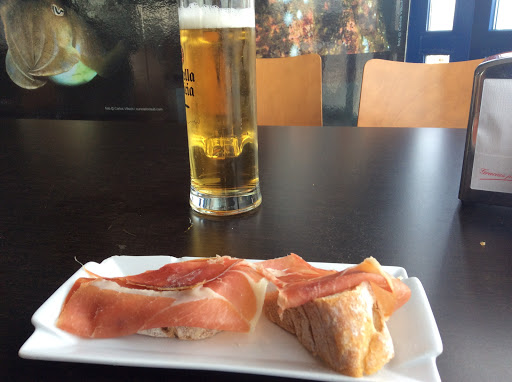 The time passed quickly though and soon I met Brian who after a days rest was ready to head off west and south in search of sunshine as the weather had been quite mixed.

A nice 50 mile trip to Camarinas which was great to check out everything was as it should be. So we headed off to do a short 25 miles which took us round  cape Finesterre and southern seas.
Finnestere 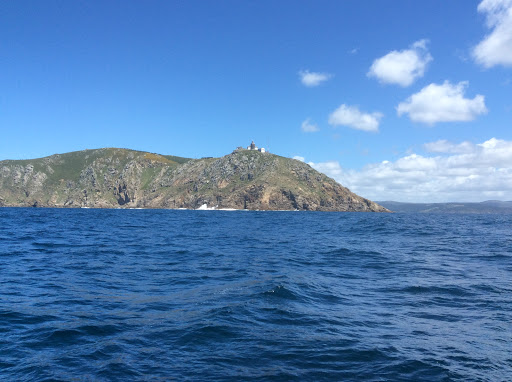 We anchored and tied up in marinas while we explored them as much as we could with the time we had. They really were very nice and not unlike our own sea lochs except of course it was sunny and warm. The places we stayed were Corcubion, Muros, Ribeira, Rianxo. It was interesting sailing among the mussel rafts when you got used to it. I had applied for the required licence to visit Islas des Atlanticas by photographing passports ships papers etc and emailing them off. Sure enough after a little reminder we got our permit which incidentally was never checked but I wouldn't want to chance not having.
The first island Isla de ONS was a quick evening run ashore which was pretty but not exceptional. Next day we headed down to Islas Cies, what a place that is. A fantastic anchorage with a beautiful beach. The weather we had was also spectacular and very hot. 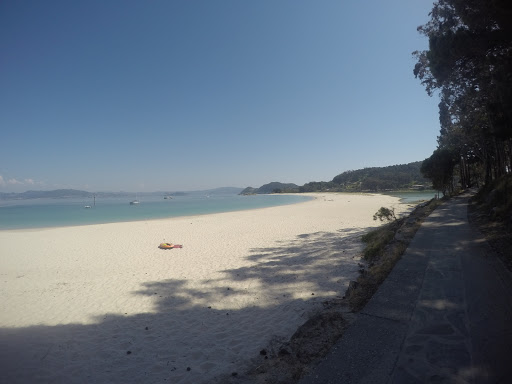 We walked a fair bit when we arrived and went ashore in the evening. Next day the weather was not so good but we set out to walk the 2 miles and climb up to the lighthouse on top of the hill. A lovely walk though eucalyptus woods and just as we were approaching the top, it got foggy. I'm sure it would have been a great view! 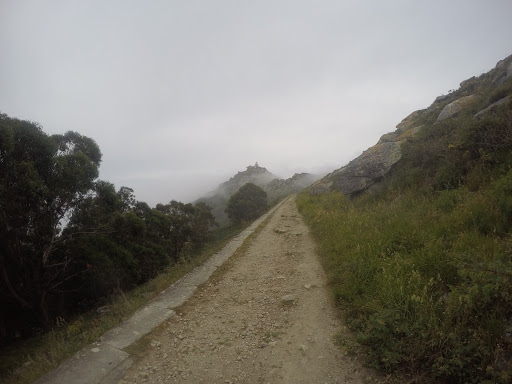 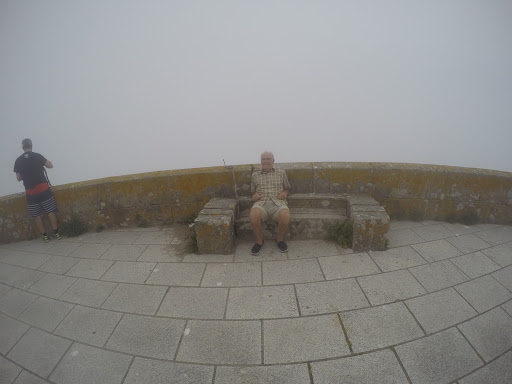 We headed off after lunch for the short hop to Baiona which was to be the last Spanish port for us. A very historic and busy wee town but unfortunately it poured with rain for a lot of the time. We were there 2 nights as the winds were not good for us. We were going to take a trip to Vigo by bus but decided Vigo in the rain would not be the greatest use of time. We walked round castles and climbed inside madonas on hills and generally made the best of the time we had. 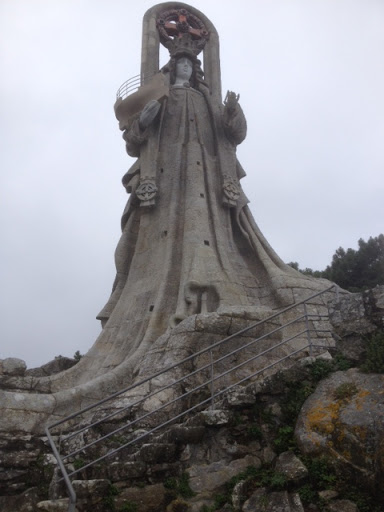 We headed south again in light winds and said farewell to the beautiful Spanish rias and hoisted the Portuguese courtesy flag making or first landfall in Varzim. A boatyard with a huge mix of boats some new  some old some really old and neglected. Having to push on to make flight gets etc we headed next to Lexios which is right next to Porto. We shoehorned into a tight spot where I was for 4 nights. Brian and I had a good day in Porto, what a lovely city. We did the ferrys, cable cars, bridges only avoiding the port tours as they expensive for what they were. 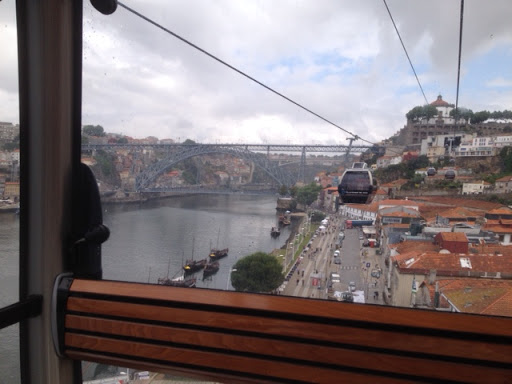 Sadly Brian's time aboard had come to an end he was good company and good crew as always.
Davy and Colin flew in on the direct cheap Ryanair flights from Edinburgh and had a shore day with interesting shopping trips with the butcher using google translate for mince. We ended up with a kilo of high end mince for Colin's legendary Chili.
Do you think there's enough! 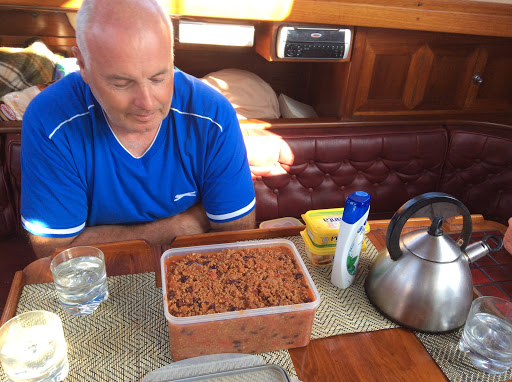